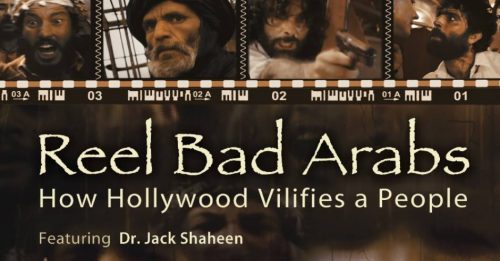 The Event Committee of the Society of International Affairs in Gothenburg in co-operation with Cinema Politica and Folkuniversitetet welcomes you to the screening of the documentary ‘REEL BAD ARABS: HOW HOLLYWOOD VILIFIES A PEOPLE’, directed by Sut Jhally.

‘REEL BAD ARABS: HOW HOLLYWOOD VILIFIES A PEOPLE’ dissects a slanderous aspect of cinematic history that has run virtually unchallenged form the earliest days of silent film to today’s biggest Hollywood blockbusters: the depiction of Arabs. The film explores a long line of degrading images of Arabs (Bedouin bandits, submissive maidens, gun-wielding “terrorists” and so on) while offering devastating insights into the origin of these stereotypic images, their development at key points in US history, and why they matter so much today.

The trailer can be found here.

The screening is free and open to everyone.

Utblick is a student magazine under the umbrella of the Society of International Affairs in Gothenburg (Utrikespolitiska Föreningen), but we write for everyone, in and beyond Gothenburg, who are interested in international politics. The… END_OF_DOCUMENT_TOKEN_TO_BE_REPLACED

The Global Inn Radio/Radio Utblick is a program focusing on the issues of today’s society through a global perspective. Each program involves explaining, discussing and debating, along with experts. They broadcast on K103 Göteborgs… END_OF_DOCUMENT_TOKEN_TO_BE_REPLACED