The new board for 2017 is elected and we want to introduce ourselves! First up in our interview series is Mikael Hemlin, President of the Society of International Affairs. 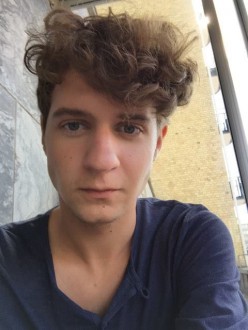 What made you want to be the president of the association?

Mikael: Well, I was in charge of Utblick magazine last year, and applying for president felt like a natural next step. Also, I believe that organizations like the UF is more needed now than ever; one of the largest problems in contemporary politics is that people in general don’t know enough about the policies, institutions etc., that govern the world. To be part of, and even lead the work of an organization that has the purpose of making people more aware of, and more interested in international politics, is an amazing opportunity. Moreover, being involved in the UF has allowed me to improve many different skills. Therefore, further involvement only felt reasonable.

What are you looking forward to this year?

To be honest, 2017 has the potential of turning into a horrifying year in politics. France, Germany and the Netherlands are holding general elections, and the worst-case scenario would most likely lead to the demise of the European Union. Hopefully it won’t come to that, however, after Trump’s victory in the US, one should be careful about ruling out populist candidates based on opinion polls. I suppose that I’m looking forward to it anyway, though, since it’s going to be such an important year. And of course it’ll be interesting to see how Trump fares in the White House, and how the Swedish political landscape changes after the recent ”controversies” of Moderaterna. Finally, I’m looking forward to developing the UF along with the rest of the 2017 board.

If you could change one thing in world politics, what would it be?

That’s a tough one. It depends on the scope of the change, and how realistic it must be. On the largest of scales, I would like to see deepened European Integration. It might have something to do with the fact the the EU is at the core of my bachelor’s programme, but I believe that further integration in areas like migration policy and foreign, security and defence policy would be of benefit to the entire world in the long run. Negotiating such a change would of course be complicated to say the least.

Tell us something only a few people know about you

I’ve been drumming since I was 10 years old, and have recently been playing a lot of progressive metal with complicated polyrhythms and stuff like that. More than a few know about that, but I suppose that the more part of those who know are older friends and family.

How are you spending Valentine’s Day?

Well, I’m in Spain, and my girlfriend is at home in Gothenburg. Valentine’s Day has never been that big of a deal to neither me nor her, so it’s not a disaster. So yeah, I’m spending my Valentine’s Day eating, reading, bathing in the Atlantic and talking to her through phone and over Messenger.

Utblick is a student magazine under the umbrella of the Society of International Affairs in Gothenburg (Utrikespolitiska Föreningen), but we write for everyone, in and beyond Gothenburg, who are interested in international politics. The… END_OF_DOCUMENT_TOKEN_TO_BE_REPLACED

The Global Inn Radio/Radio Utblick is a program focusing on the issues of today’s society through a global perspective. Each program involves explaining, discussing and debating, along with experts. They broadcast on K103 Göteborgs… END_OF_DOCUMENT_TOKEN_TO_BE_REPLACED