Next up in our Board series is Liza Rousselle, one of our two heads of the Model United Nations Committee! 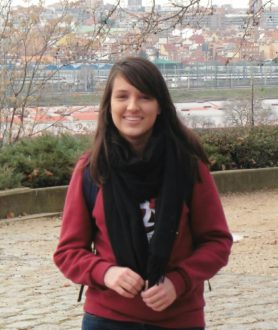 What made you want to be head of the MUN Committee?

I only started MUN in September. I always wanted to try but somehow it never happened before. Immediately I fell in love with it and wanted to be involved seriously. When the previous chair said he was not running for this year, I considered doing it but I was still hesitant because I didn’t have that much experience. Rosalie was thinking the same and we talked about it and decided to run together. The fact that we both have the same mother tongue and that we live together really helps.

What international issue has got your attention at the moment?

I am really concerned about the situation in Chechenia, regarding the treatment of homosexual people. They are abducted in mass and kept in concentration camps where they are mistreated and even tortured and the government doesn’t care! It doesn’t even acknowledge their existence! As a member of the LGBTQ community I am really grateful for the way I’m treated in my own country and I want the same for my peers. So right now I am really worrying about it and trying to do my part from abroad; especially when a lot of the media in some countries won’t even report it.

You’re from France. Any thoughts on the upcoming French election?

The elections this year are really interesting in several regards. We have observed the emergence of both far right and far left populism. Although the far right has been present before, they never really had the potential to win as much as they do now. Furthermore, we have two candidates who have left the majority party to create their own (Emmanuel Macron and Jean-Luc Mélenchon). This might be the dawn of a political renewal, going from an almost bipartisan system to a truly multi-partisan democracy, with more nuances in the representatives’ position. Also, the use of social media is stronger than ever. We have caught up with what has been done since 2008 and maybe even gone further, with Facebook Live and Snapchat. I don’t know if that would have happened if the candidates weren’t so close in the polls.

If you could have a debate with anyone, who would it be and what would the topic be?

That might seem weird but I’d like to debate with the leaders of the Westboro Baptist Church, who are famous for their homophobia and anti-gay protests (“God hates fags”) as well as hating a lot of other groups (Catholics, Jews, Muslims, politicians, soldiers, etc..). The discussion would be about what convinces them that homosexuality is a sin and what drives them to persecute people when their religion preaches loving your neighbor, forgiving sinners and not judging others. I don’t think I could change their mind, but at least I’d try!

The UF is traveling a lot this spring. Tell us about a good travel memory of yours!

One of my best memories was in November. I went to Lapland, which has always been a dream of mine. One afternoon we went riding on snowmobiles across the snowy plains. It was a real winter wonderland. We came back on dog sleds, during the sunset. The quiet, the colors in the sky, the cold breeze, all of it was just magical. We didn’t get to see the Northern lights but it was well worth it!

Utblick is a student magazine under the umbrella of the Society of International Affairs in Gothenburg (Utrikespolitiska Föreningen), but we write for everyone, in and beyond Gothenburg, who are interested in international politics. The… END_OF_DOCUMENT_TOKEN_TO_BE_REPLACED

The Global Inn Radio/Radio Utblick is a program focusing on the issues of today’s society through a global perspective. Each program involves explaining, discussing and debating, along with experts. They broadcast on K103 Göteborgs… END_OF_DOCUMENT_TOKEN_TO_BE_REPLACED