Fika Politica: The Protests for Women’s Rights in Iran

Iranians have been protesting in the streets since the death in custody on 16th September of Mahsa Amini, a 22-year-old woman who was arrested by morality police for the crime of failing to cover every last strand of her hair. In large street demonstrations, which have been happening in all of Iran’s major cities and many small towns, women have burnt their hijabs, often dancing at the same time, while others have cut off their hair. Strikes have been reported in schools, universities and the country’s vital oil sector. Violent clashes have at times broken out, with protestors torching buildings of the security forces. The regime has responded with extreme repression and violence, where hundreds of people have been killed. The protests have been a long way coming, with the iranian people feeling frustration over the dress code and economic collapse during the latest years, and the death of Mahsa Amini was the last drop for the iranian 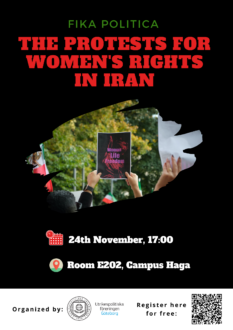 people. The protests have now been going on for 8 weeks but unlike previous protest movements in Iran the momentum of this uprising doesn’t appear to be diminishing.

During this session we will discuss:

The event is organised by the Society of International Affairs in Gothenburg / Utrikespolitiska föreningen Göteborg (UF) ufgbg.se | social@ufgbg.se

Utblick is a student magazine under the umbrella of the Society of International Affairs in Gothenburg (Utrikespolitiska Föreningen), but we write for everyone, in and beyond Gothenburg, who are interested in international politics. The… END_OF_DOCUMENT_TOKEN_TO_BE_REPLACED

The Global Inn Radio/Radio Utblick is a program focusing on the issues of today’s society through a global perspective. Each program involves explaining, discussing and debating, along with experts. They broadcast on K103 Göteborgs… END_OF_DOCUMENT_TOKEN_TO_BE_REPLACED