Colombia: On the Verge to Peace 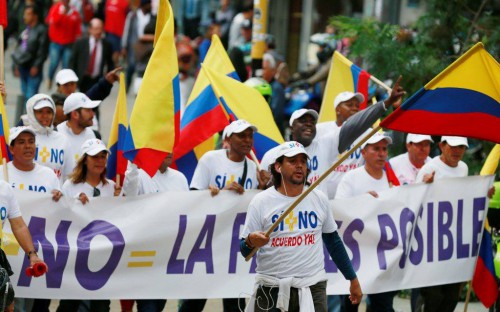 On September 26th, the Colombian government and FARC signed a peace agreement in Cartagena after four years of negotiations to end the 52-year civil war. After the agreement was voted down with a onarrow margin in a national referendum on 2nd of October, negotiations opened up again on Cuba in early November, trying to make adjustments according to the political oppositions objections. A new agreement was reached on November 13th.

A pathway to build a future in peace seems thus to be attainable, but many challenges remain to be addressed and resolved in the near future. In order to illuminate this historical agreement Stefan Åström will in this lecture point to the conflicts historical causes, why earlier attempts to a negotiated peace failed and why it succeeded this time. Furthermore the main challenges to implement the agreement will be discussed, both in the shorter and longer perspective.

Stefan Åström currently works as Training- and Project Manager at the Folke Bernadotte Academy´s Disarmament, Demobilization and Reintegration (DDR) program. He has previously served with the Organization of American States’ DDR verification mission in Colombia and its HQ in Washington DC and held positions at UNDP Colombia, UNHCR Venezuela, CIMIC/SFOR Bosnia, MINUGUA Guatemala and Swedish Migration Board. He also holds a B.Sc. with major in Political Science and a Master in International Humanitarian Law.

Anyone is Welcome! Free for members. 20kr for non-members (single entry)

You will be able to register for a one year membership (50kr) before the lecture.

Utblick is a student magazine under the umbrella of the Society of International Affairs in Gothenburg (Utrikespolitiska Föreningen), but we write for everyone, in and beyond Gothenburg, who are interested in international politics. The… END_OF_DOCUMENT_TOKEN_TO_BE_REPLACED

The Global Inn Radio/Radio Utblick is a program focusing on the issues of today’s society through a global perspective. Each program involves explaining, discussing and debating, along with experts. They broadcast on K103 Göteborgs… END_OF_DOCUMENT_TOKEN_TO_BE_REPLACED