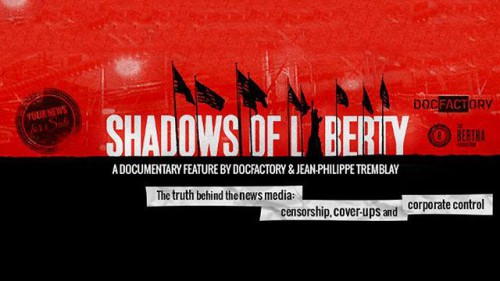 The Event Committee of the Society of International Affairs in Gothenburg in co-operation with Cinema Politica welcomes you to the screening of the documentary Shadows of Liberty.

The film takes an intrepid journey through the darker corridors of the American media landscape, where global media conglomerates exercise extraordinary political, social, and economic power. The overwhelming collective power of these firms raises troubling questions about democracy.

Highly revealing interviews, actuality, and archive material, tell insider accounts of a broken media system, where journalists are prevented from pursuing controversial news stories, people are censored for speaking out against abuses of government power, and individual lives are shattered as the arena for public expression has been turned into a private profit zone.

Will the internet remain free, or be controlled by a handful of powerful, monopolistic corporations? The media crisis is at the core of today’s most troubling issues, and people everywhere are taking action, trying to change the media monopolies strangle hold information.

The screening is free and open to everyone. After the screening there will be an opportunity to discuss the film and we hope you can stay for that!

The trailer can be found here: https://www.cinemapolitica.org/film/shadows-liberty

Utblick is a student magazine under the umbrella of the Society of International Affairs in Gothenburg (Utrikespolitiska Föreningen), but we write for everyone, in and beyond Gothenburg, who are interested in international politics. The… END_OF_DOCUMENT_TOKEN_TO_BE_REPLACED

The Global Inn Radio/Radio Utblick is a program focusing on the issues of today’s society through a global perspective. Each program involves explaining, discussing and debating, along with experts. They broadcast on K103 Göteborgs… END_OF_DOCUMENT_TOKEN_TO_BE_REPLACED